There was payback in Baku for Valtteri Bottas as the Finn won the Azerbaijan Grand Prix one year on from being denied almost certain victory in the city due to a late-race puncture. 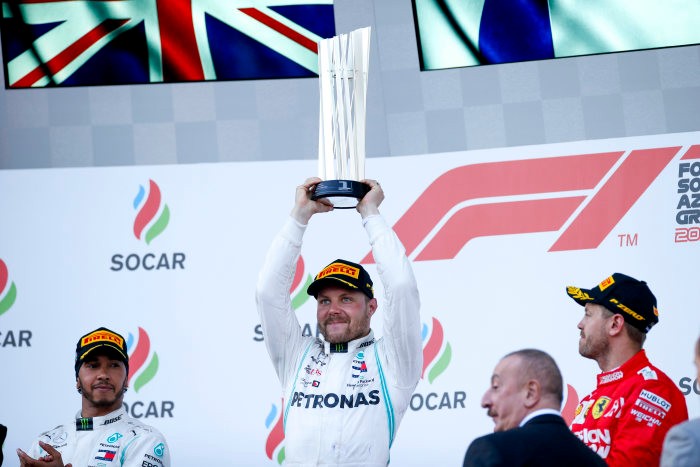 There was no repeat of that kind of drama in today’s fourth F1 race at the notoriously tricky street circuit and after resisting pressure off the starting line from team-mate Lewis Hamilton, Bottas delivered a faultless performance in a largely incident-free race to take the fifth F1 win of his career. Second place for Hamilton ahead of Ferrari’s Sebastian Vettel made it four one-two finishes in a row for Mercedes. 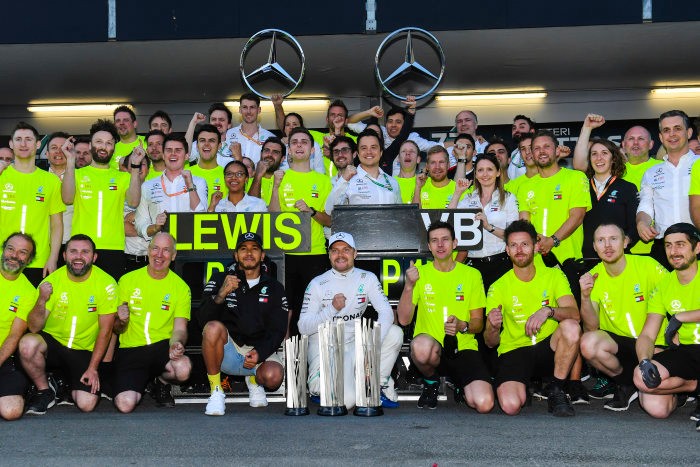 When the lights went out at the start, pole sitter Bottas was immediately put under pressure by Hamilton who made an excellent start. The Finn defended well through the first few corners, however, and managed to hold his lead as the field swept up towards the Baku’s Old Town.

Sebastian Vettel held his starting third place, but behind him fourth-on-the -grid Max Verstapen was jumped at the start by Racing Point’s Sergio Pérez. Verstappen quickly responded and within a few laps he had closed up behind the racing Point’s gearbox. On the long pit straight, and under DRS, he blasted past the Mexican on entry to Turn 1 to reclaim fourth place. 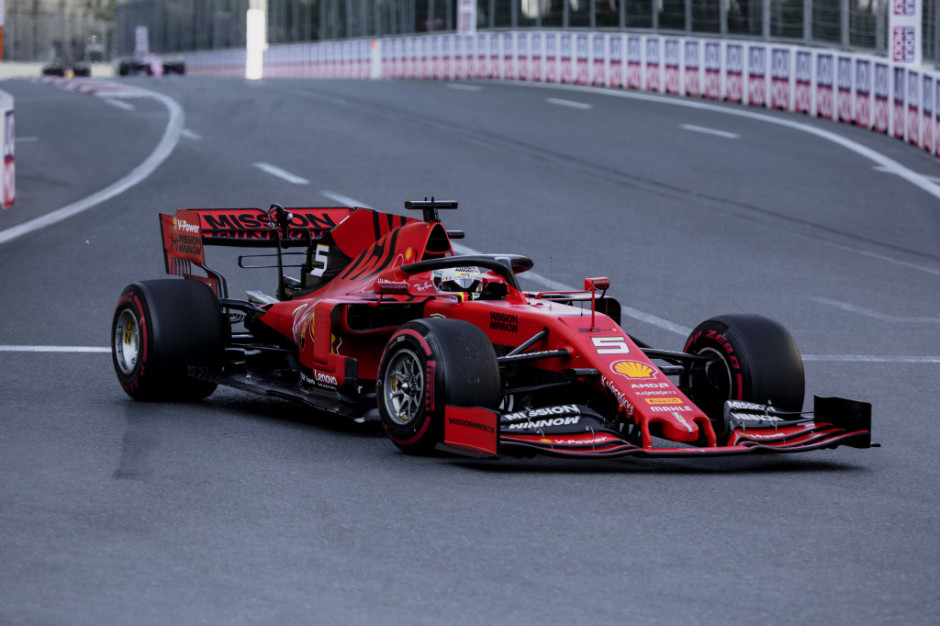 Behind them Ferrari’s Leclerc was on a march. At the start, on medium tyres, he had dropped back to P11 but by lap seven he had worked his way back up the order to sit in P5, two seconds behind Verstappen. And on lap 10, the Ferrari driver took advantage of DRS and his now better-performing medium tyres to pass Max on the pit straight.

Like Leclerc, Red Bull’s Pierre Gasly had also started on medium compound tyres, though from the pit lane, due to penalties from earlier in the weekend. As soft-shod rivals around him pitted, the Frenchman was boosted up the order. He also maximised the opportunity the mediums gave in terms of performance and by lap 13 he had climbed to sixth place.

Vettel was the first of the frontrunners to make a pit stop, on lap 11, and the German’s move triggered a response from the other soft tyre starters at the front of the pack.

Verstappen was among those who dived into the pit lane, the Dutchman emerging in P6 behind his team-mate. He quickly closed on Gasly, and with the drivers on different strategies, the Frenchman sensibly moved across to put Verstappen in P5 once more.

At the halfway point of the 51-lap race, Leclerc, who had yet to stop, now led Bottas by just three seconds. Hamilton was a further 3.5s second back with Vettel three seconds behind the champion.

By lap 31, Bottas was just 1.1s behind leader Leclerc who was now holding the Mercedes up before his stop. That allowed Vettel to stay in touch with Hamilton and the German sat three seconds behind the champion.

Bottas finally made his way past Leclerc on lap 32, and was swiftly followed by Hamilton and Vettel. That was the cue for Ferrari to pit the Monegasque driver. He dived into the pit lane on lap 34 to take on soft tyres.

He rejoined in P6, behind Gasly. The Red Bull driver defended well for a couple of laps but on his ageing medium tyres there was little he could do against the Ferrari man and on lap 36 Leclerc, armed with fresh tyres and DRS got past.

Gasly was sixth again but with 30 seconds in hand over Pérez, looked safe for another solid points haul. It wasn’t to be however. On lap 39, he suddenly slowed dramatically and coasted off into a run-off area, his race ended by a mechanical issue.

The Virtual Safety Car was deployed and when the track went green again, Bottas was firmly in control, three seconds clear of Hamilton, who was in turn 2.3 ahead of Vettel. Hamilton closed but with two laps to go he made a mistake and ran wide, handing Bottas his second win of the season.

Max took his third fourth place finish in a row ahead of Leclerc who grabbed the point for fastest lap after pitting for a new set of soft tyres in the closing stages.

Perez took sixth place for Racing Point, while McLaren saw both Carlos Sainz and Lando Norris in the points in P7 and P8 respectively. Racing Point also saw both its drivers score with Lance Stroll in P9. Kimi Räikkönen took the final point, having started from the pit lane.