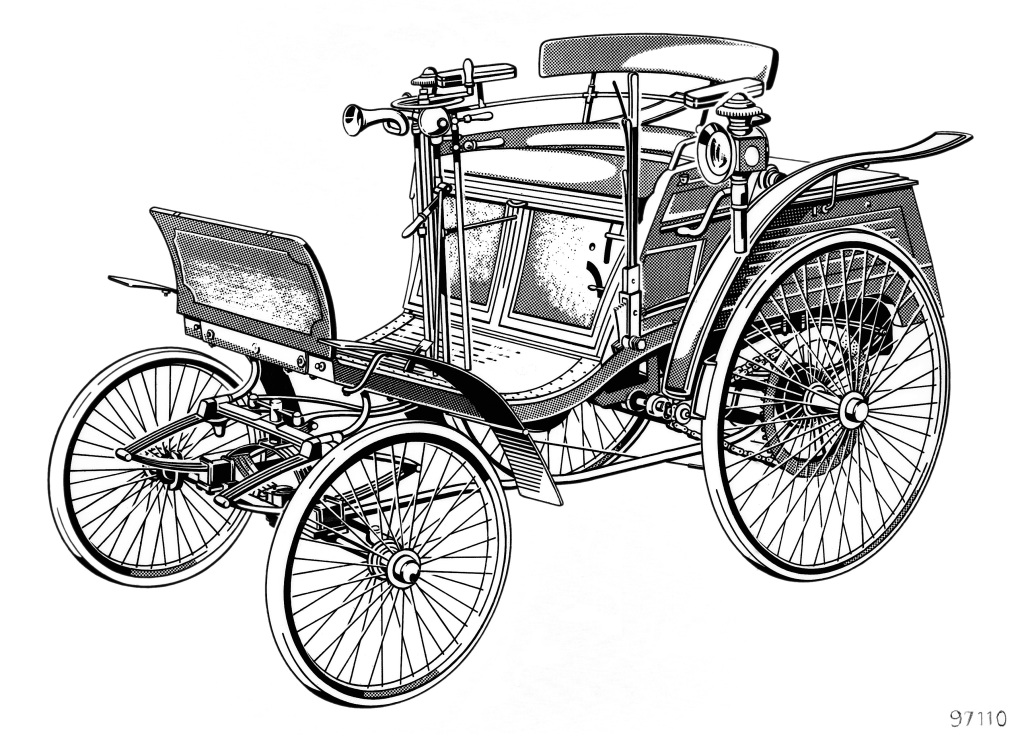 1894, 125 years ago, Benz & Cie. introduces the first small car – the Benz Motor Velocipede. The name is later colloquially abbreviated to “Benz Velo”. The type family enjoys great success in Germany and in other European countries. With some 1,200 vehicles delivered to customers by 1902, it quickly becomes the world’s first mass-produced automobile. 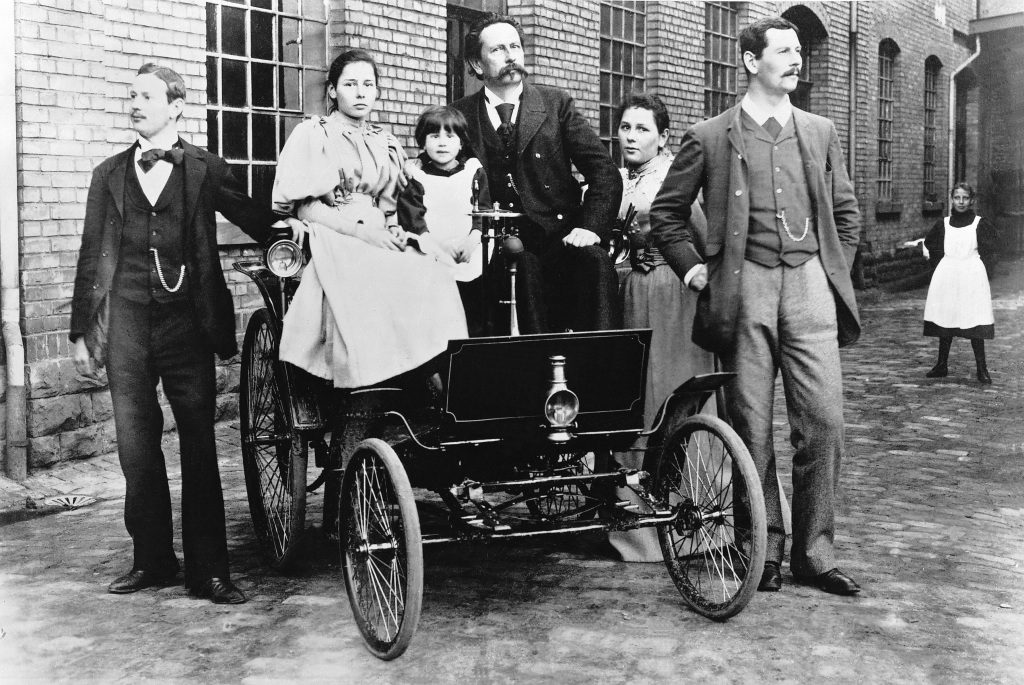 Stuttgart. The Benz Motor Velocipede makes its debut 125 years ago in April 1894: a small, lightweight (280 kilograms) car with a recumbent, single-cylinder engine rated to 1.1 kW (1.5 hp) that is also the very first small car. One of the most important innovations of the four-wheeled vehicle, which is synonymous with the Benz Velo abbreviation, is the double-pivot steering system further developed by Carl Benz. Benz files a patent application for this engineering solution on 28 February 1893, which is subsequently issued as patent DRP 73 515. The first double-pivot steering system becomes a physical reality in the same year when fitted to the Victoria and Vis-à-Vis models, which are significantly larger than the Velo that follows in 1894.

Benz & Cie. puts the new model on the front page of the catalogue published in April 1894 to accompany the launch of the Velo sales campaign. This prominent presentation leads to a successful start for the new vehicle and the Velo Comfortable model (from 1898) derived from it in the years to come. From 1894 to 1902, the Velo and Comfortable models see approximately 1,200 production units with engines of rated capacities ranging from 1.1 kW (1.5 hp) to 2.6 kW (3.5 hp). This, in turn, makes this type family the world’s first mass-produced automobile. The small cars are sold in Germany as well as abroad.

In an interview with the “Allgemeine Automobil-Zeitung” (AAZ) in 1909, Carl Benz, the inventor of the car from Mannheim, summarises: “This vehicle was quite literally grabbed out of our hands. What we made was sold immediately.”

The Benz Motor “Velocipede” is launched in 1894 with four wheels and a modern double-pivot steering system. The top speed is 20 km/h, and its two-stage flat belt transmission allows the machine to overcome gradients of up to ten per cent. Equipped with lighting in the form of “lanterns”, the sales price is 2,000 marks.

As the compact car is being developed, vehicles with two and three wheels also make an impact. The two-wheeled bicycle (also called the velocipede, or Latin for “quick foot” in characterising the “drivetrain” that utilises the muscle power generated by the legs) lends its name to the world’s first mass-produced automobile. This also reflects Carl Benz’s enthusiasm for the bicycle and the technology it employs. As early as 1867, the automotive pioneer-to-be purchases a bicycle with iron-tyred wooden wheels and embarks on extensive cross-country expeditions.

The three-wheeled vehicle along the evolution timeline of the Benz Velo is a prototype that is built in the early 1890s. The Velo is reminiscent of the design of the Benz Patent Motorcar in 1886. This first automobile in history also has two wheels at the back and a steered front wheel.

During the eight years of production, the Benz Velo type family and the later Benz Comfortable model are continually developed and advanced further. The January 1898 catalogue, for example, showcases a Benz Velo with a more powerful 2 kW (2.75 hp) engine that is available for an additional 200 marks. A sun guard (parasol) available as a special equipment option costs 100 marks. The weight of the Velo increases to 320 kilograms.

The same catalogue from early 1898 also debuts the Velo Comfortable as a luxury version of the Velo. The more powerful engine is part of the standard equipment package, and the retail price for the “very well appointed” model is 2,500 marks. Features of the model include an elaborately upholstered bench seat for the driver and front passenger and a child seat installed opposite the direction of travel. Pneumatic tyres (“pneumatics”, for 350 marks) are now also available as optional extras. From 1899 onwards, both models feature a third gear ratio as a standard feature.

As of October 1899, Benz & Cie. simplifies the designation of the two models, which are now referred to as the Velocipede and the Comfortable, both of which now come with a 2.2 kW (3 hp) single-cylinder engine as a standard feature. The Velocipede costs 2,500 marks, whereas the Comfortable is priced at 2,800 marks. In the Benz catalogue from January 1901, the Velocipede is no longer listed and instead only the Comfortable is included. In its last year of production – 1902 – this car is fitted with a 3.3 kW (4.5 hp) engine that, according to the catalogue, is capable of a top speed of 35 km/h.

This effectively concludes the success story of the Benz Velo and the Benz Comfortable. The around 1,200 units of the world’s first mass-produced automobile are sold most prevalently in Germany, England and France. In so doing, these compact vehicles assume a key position in the development of mass production technologies leveraged in a globally networked automotive industry.

BOTTAS BEATS HAMILTON BY 0.6S IN SPAIN TO TAKE THIRD STRAIGHT POLE The day of Bottas! He won the Azerbaijan Grand Prix
목록