Lewis Hamilton successfully managed to keep severely worn tyres alive to keep his close rivals at bay in Monaco and take his third win in the Principality ahead of Ferrari’s Sebastian Vettel and Mercedes team-mate Valtteri Bottas. 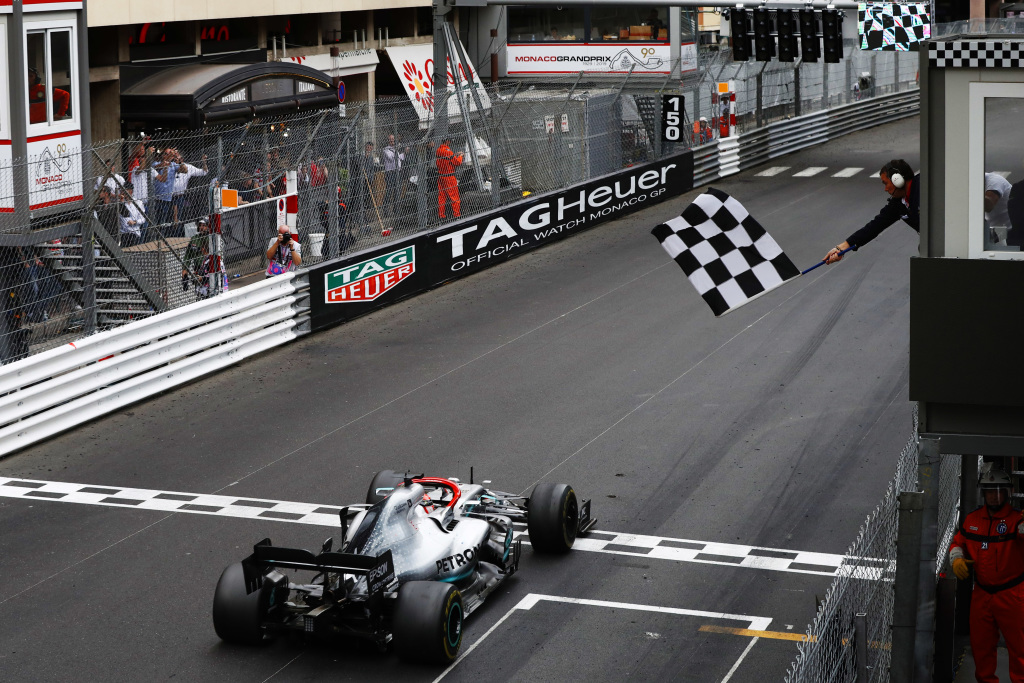 Early in the race Hamilton pitted for medium tyres during a Safety Car period sparked by local hero Charles Leclerc shedding debris across the track following a puncture. With the cars directly behind targeting a long stint until the end of the race having taken on hard tyres, Hamilton was left to nurse his yellow-banded Pirellis until the end.

And despite relentless pressure from Red Bull’s Max Verrstappen, who was seeking to negate a time penalty for an unsafe release by passing the Briton, Hamilton managed to keep the tyres alive until the flag to take his 77thcareer win. 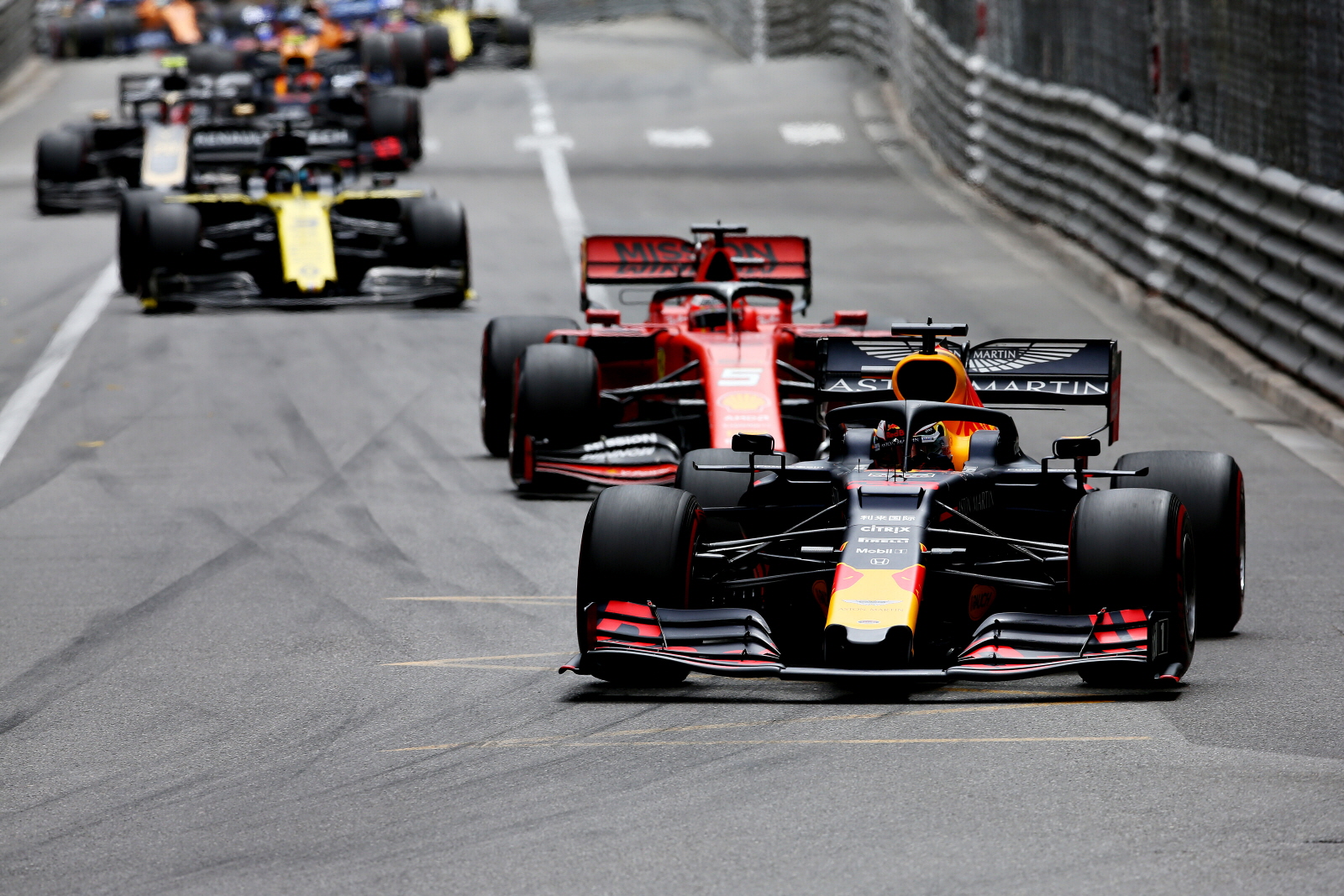 When the lights went out for the start, polesitter Hamilton got away well and held his advantage over fello front-rwo started Bottas, third-placed Verstappen and Vettel.

Further back Ferrari’s Charles Leclerc, starting in 15th, was on a march. The local hero quickly climbed to P13 and then began to chase down Romain Grosjean. Going into Rascasse, the Haas left a small gap and Leclerc pouned, slipping down the inside of the Haas to steal the place. 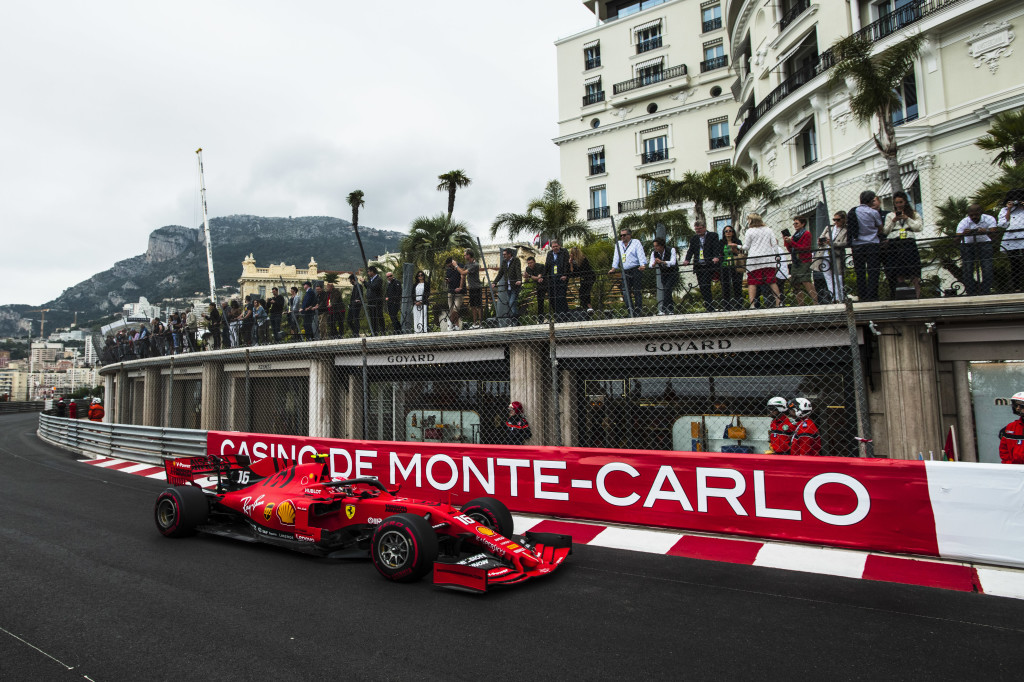 Having succeeded once, the Monegasque driver decided to try the same passing manoeuvre on Renault’s Nico Hulkenberg. This time, though, the gap was too tight and Leclerc clipped the barrier with his rear right wheel.

He carried, passing the pit entry as he did so, but it became clear that he’s sustained a puncture. With the whole track to navigate before he could pit, his tyre quickly began to disintegrate. He pitted, taking on medium tyres, but with debris all over the track the Safety Car was deployed. With severe damage to the floor of his car, Leclerc would retire after 16 laps.

During the SC period Mercedes opted to pit. The champion team stacked their drivers and both took on mediums, with Hamilton first in. The delay to Bottas provided Max with an opportunity and he managed to get fitted with new hard tyres more swiftly than the Finn. It meant they met in the pit lan as they went to rejoin and there was contact. Verstappen exited the pit lane ahead of Bottas in P2 but the incident was placed under investigation by the stewards. Bottas sustained a puncture in the coming together and pitted again at the end of the following lap for hard tyres. He dropped to P4 behind Vettel.

At the end of lap 22, the stewards returned a verdict on the incident and the Dutch driver was given a five-second time penalty. Looking for the most effective way of negating the penalty, Verstappen then began to apply pressure on Hamilton, who was now trying to nurse his medium tyres to the flag.

By lap 30 Verstappen was 0.5s behind the Mercedes driver and forcing the champion to stress his tyres more than he would have wished. But as he applied the pressure Verstappen too also began to work his tyres harder than he might have liked and by half distance he was experiencing some graining to his front-right tyre and could find no way past Hamilton.

Verstappen was now running out time. Behind him Vettel and Bottas were closing up and the Dutchman’s hopes of claiming a podium position began to fade as Bottas got well within the five seconds Verstappen would lose at the flag.

The only possibility of holding on to a podium place rested in getting past Hamilton. Versatappen tried to make the move two laps from home. He braked late into the Nouvelle Chicane, trying to get down the inside of Hamilton’s Mercedes. Max locked up, however, and pushed the leader across the chicane.

They both kept going but Hamilton was able to keep the chasing pack at bay over the final two laps and crossed the line to take his 77thcareer win.

He was followed by Max, but with the five-second penalty immediately applied, he dropped to fourth behind Vettel and Bottas.

Pierre Gasly followed to take an excellent fifth place, with the Frenchman also taking his second fastest lap point of the season following a late ‘free’ pit stop for soft tyres. Behind Gasly, Carlos Sainz took sixth place for McLaren, while Toro Rosso enjoyed a profitable day with Daniil Kvyat seventh and Alex Albon eighth, ahead of Renault’s Daniel Ricciardo. The final point on offer was claimed by Romain Grosjean.